How strong is a Nord Stream pipe? Quite!

The steel pipe itself has a wall of 4.1 centimeters (1.6 inches), and it's coated with another 6-11 cm of steel-reinforced concrete. Each section of the pipe weighs 11 tonnes, which goes to 24-25 tonnes after the concrete is applied. pic.twitter.com/BFYnv36CaF

Biden in Feb 2022: "If Russia invades…then there will be no longer a Nord Stream 2. We will bring an end to it."

Q: "But how will you do that, exactly, since…the project is in Germany's control?"

Biden: "I promise you, we will be able to do that."pic.twitter.com/e091ddF4Pv https://t.co/DHaCuETo8y 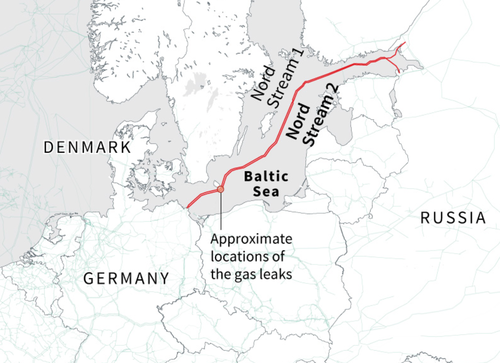 President Joe Biden said that the Nord Stream 2 gas pipeline would be halted if Russia invades Ukraine and stressed unity with German Chancellor Olaf Scholz as the West rallies to avert a war in Europe https://t.co/Qyp7NJEEQS pic.twitter.com/TkhrmNm0yy