Pelosi is on the way to Asia pic.twitter.com/af1mf7HYsc

📹| Warplanes of the US Navy are flying near Taiwan.
▪️Very harsh statements from China continue to come before US House of Representatives Speaker Pelosi's visit to Taiwan
▪️Tension in the region has risen to its highest level. pic.twitter.com/9AzZGQ3QPy 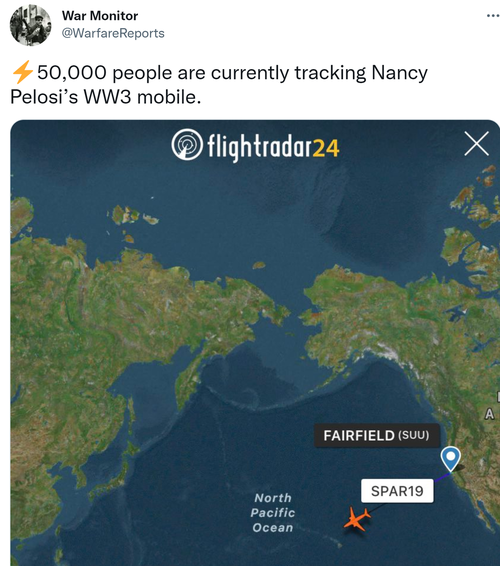 #Latest China's remarks on countering #Pelosi's possible visit to #Taiwan shows highest level of warning. All options, including military ones, are already on the table. It's crucial to accurately understand China's remarks and avoid misunderstandings, experts.@globaltimesnews pic.twitter.com/0LRJ4e0Jgt

Satellite images show the arrival of the US aircraft carrier strike group, led by the nuclear-powered aircraft carrier USS Ronald Reagan, into the South China Sea en route to the Taiwan Strait. pic.twitter.com/8NFH4RWupc

“Don’t say we didn’t warn you!” Analysts warned at a top-level think tank forum that open options in military and comprehensive countermeasures ranging from economy and diplomacy from China will wait if Pelosi gambles to visit Taiwan island. https://t.co/zDDsidxb3m

Don't want to sound alarmist, but IMO it's notable that at this time of US-China tension, 3 of China's largest/newest roll-on/roll-off civilian ferries appear to be off their normal routes and are in or have moved south toward the Taiwan Strait. All 3 are associated with the PLA.